a book, a poem, a drawing, a dog. a quote, some knitting, a home-grown blog. pictures and words, a space outlined. tell me your stories, and I'll tell you mine.

Just enough space to breathe a bit, to make some things and to think about the important things in life. Not someone else’s list of important, but my own. And, believing what Rumi said:

Let yourself be silently drawn by the strange pull of what you really love. It will not lead you astray.

I doubt I can post a photo of this work, but I’m sure I can post a link and you can see something I consider really beautiful in many ways. What do you think?

Struggling with the daily writing practise, poetry class and getting lost in the forest, I came upon this oasis:

We have been taught that only poetry of extremely high quality is poetry at all; that poetry is a big deal, and you have to be a pro to write it, or, in fact, to read it. This is what keeps a few poets and many, many english departments alive.

-LeGuin, Dancing on the Edge of the World

Aurora was an artist. Her landscapes were mythical dreams of green and blue.

Mo felt a draft coming from behind the library shelves. There was a solid wall behind those shelves. A draft wasn’t possible. 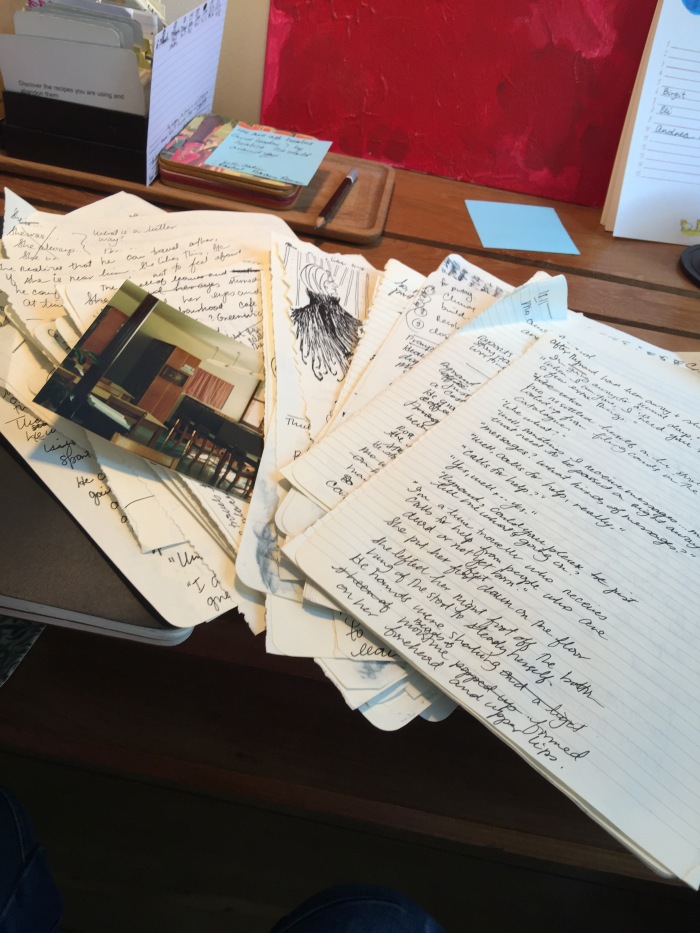 This is my book, such as it is. I tell people I am writing one. Then, I give some kind of disclaimer. I’m doing my best to put it out there in whatever state, as itself. If I’m honest there’s a lot of editing that goes into it before anyone else sees it. Therein lies the next life goal.

I’m a loner. I don’t like groups, schools, literary circles. At Princeton, there was a luncheonette, or something like that, and I was invited to eat there. Joyce Carol Oates was there and Toni Morrison was there and I was so afraid, I couldn’t eat anything at all! Mary Morris was there and she’s a very nice person, almost the same age as I am, and we became friends, I would say. But in Japan I don’t have any writer friends, because I just want to have . . . distance….

During the four years of writing The Wind-Up Bird Chronicle, I was living in the U.S. as a stranger. That “strangeness” was always following me like a shadow and it did the same to the protagonist of the novel. Come to think of it, if I wrote it in Japan, it might have become a very different book.

My strangeness while living in the U.S. differed from the strangeness I feel while in Japan. It was more obvious and direct in the U.S. and that gave me a much clearer recognition of myself. The process of writing this novel was a process similar to making myself naked, in a way….
I think that my job is to observe people and the world, and not to judge them. I always hope to position myself away from so-called conclusions. I would like to leave everything wide open to all the possibilities in the world.

I prefer translating to criticism, because you are hardly required to judge anything when you translate. Line by line, I just let my favorite work pass through my body and my mind. We need critiques in this world, for sure, but it’s just not my job.
Haruki Murakami, The Art of Fiction No. 182

…Reynard. He time travels. Saying it like that doesn’t really do him justice. And, he’s not really a he.

I benefited greatly from being a teacher—that is, from being able to spend a great deal of time reading, writing and educating myself.